In July 1919, the City of Alcoa was incorporated, and was touted as the first planned city in the State of Tennessee. It adopted a commission/manager structure in which three commissioners were elected for staggered two-year terms. Although Kingsport was the first, Alcoa was the second city in the state to adopt the city manager form of government. The three commissioners selected the mayor from among their ranks. Collectively, they appointed the city manager and fixed his salary. For many years, the city officials tended to be Alcoa Inc. men or employees of the Babcock Land and Lumber Company (named Bond-Woolf in 1934 and Veach-May-Wilson in 1946).

The City Manager’s responsibilities were many. In this part-time position with a $2,000 annual salary, the manager was in charge of police; fire protection; education; public welfare; town construction and maintenance; power and light (still owned by the company until 1956) and water utilities; quarry, brick and tile works; and the concrete mixing plant and lumber mill. The first City Manager was V.J. Hultquist, who served in this capacity for 27 years. He has been referred to as a leader among a group of futurists who planned and developed this company town.

The City’s first paving and sewer construction began in September 1919, continuing the program begun by the company in 1917. The most prominent street in the city is named Hall Road after Charles M. Hall, the inventor of the electrolytic process of producing aluminum. Most streets in Alcoa are named after inventors, scientists and writers.

New quarters continued to be built to house the growing number of Alcoa Inc. workers. Most of the homes were built between 1917 and 1920. The company built schools, and assisted churches. One particularly interesting building was the Mule Barn, which stood at the intersection of Hall and Lincoln Roads, the location of the current Alcoa Post Office. The building was of strong construction because, as Hultquist put it, "the mule was an important member of the construction organization." When the steam engine arrived, the unique structure was converted to a school for the African American community and later as the Alcoa Municipal Building. The structure was razed in 1961.

During slack times, Hultquist used company workers for various city improvements such as parks. Springbrook Park and Springbrook Swimming Pool were begun in 1930. "We were doing much more than building and operating a reduction plant. We were laying out a town; grading its streets; erecting its buildings, both public and private and undertaking to supply all the modern services such as water, electricity and sewage (disposal)," Hultquist was reported to say. "The man who owns his own home has just a little more interest in living conditions that the man who does not own his home. He has more interest in the condition of the schools and other community interests. He has more pride in his family and he has more pride in his work." 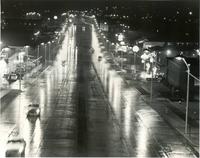 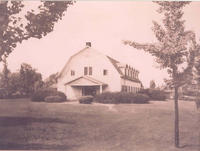