Patrol Operations consists of professional men and women who serve our community proudly each day. The citizens of Alcoa are to be proud of the quality of work and excellence in service that their police officers provide.

Officers patrol the City of Alcoa around the clock, responding to emergencies and requests for assistance and enforcing criminal and traffic laws.

All officers work out of the public safety headquarters located at 2020 North Wright Road. Officers utilize a variety of vehicles for patrol that include bicycles, motorcycles, and unmarked and marked police vehicles.

In an effort to reduce accidents and better enforce traffic laws, the department formed the Traffic Safety Team in 2005 as an addition to the division. The team includes motor officers and specially assigned patrol officers. 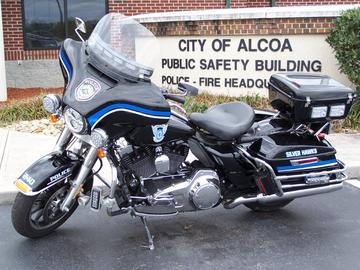 The City of Alcoa Police Department has a new officer ready to patrol the streets, K9 Kodi. K9 Kodi and his handler, Officer Cory Phillips, are now in service after undergoing six weeks of intense training together at Shallow Creek Kennels in Sharpsville, Pennsylvania.

K9 Kodi is a 1 and a half years old Belgian Malinois from Holland and is a dual purpose police canine trained specifically for patrol work. That is, he is trained in both criminal apprehension and narcotic detection. Kodi can track lost persons and wanted suspects as well as conduct building and area searches for suspects in hiding. He can conduct searches for articles or evidence associated with crimes that suspects have dropped or tried to discard. Additionally, K9 Kodi is trained to protect Officer Phillips and can detect up to five different types of narcotic odors.

The City of Alcoa Police Department is excited to have K9 Kodi in its ranks. The department has not had a K9 in service since May, 2015 when K9 Kona, handled by Officer Matt Caldwell, retired after seven years of service