Plant Development of the Water System

In 1914, with the industrial development of the Aluminum Company of America’s (now Alcoa, Inc.) local plant, the City of Alcoa’s water system began to evolve. To provide potable water to its three manufacturing plants and its employees, the plant (as how most people then and now knew Alcoa, Inc.) built a pumping station and a six-inch water main from Hannum Spring in Maryville. A large, elevated, storage tank holding a day’s supply of water was built on Glascock Street. With a flow of 500-600 gallons per minute, the spring was the first water supply for both the City and the plant. Distribution pipes carried the water throughout the City from the spring.

In 1918, workers laid a six-inch main to Springfield Springs (also known as Manning Springs) adjacent to the Old Knoxville Pike near its intersection with East Broadway. The Springfield Reservoir had a 350,000-gallon capacity and was fed by a second source, Webb’s Mill Spring. A brick pump station stood next to the reservoir.

On nearby Wildwood Hill (also known as Reservoir Hill), a 4.5 million gallon reservoir and pumping station were built to create a six-day supply of water. The September 1919 Aluminum Bulletin reported that "10.6 miles of water pipe had been laid, including 9,100 feet of a 24-inch wood stave pipe, 3,250 feet of 18-inch wooden pipe and varying amounts of cast iron pipe of four, six, eight, 10, 12, and 18-inches in diameter." In later years, a 16-inch cast iron main replaced this and a second, larger reservoir added. According to the June 1920 Aluminum Bulletin, the Knoxville Power Company at that time had installed "over ten miles of water mains which are supplying pure water to all parts of the city." To kill bacteria, chlorine gas was added to the water as it was pumped. 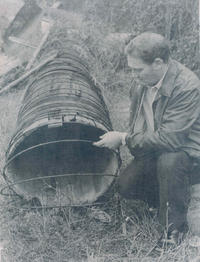 In the 1960s photograph to the left, Don Bledsoe examines a section of the 1919 wooden stave pipe installed from the Wildwood Reservoir to the City. Heavy wooden wire wrapped around the wooden pipe. Bledsoe recounted that as a child he saw two-man crews walking the route of the line, carrying a bucket of wooden pegs, looking for leaks. When a wet spot was found, they would dig down to the leak, whittle the end of a peg to fit the hole, drive it into the pipe and recover it with dirt. As the peg became wet, it would swell and seal the hole that had been a leak.
May 1927 saw the Little River pumping station and filter plant begin operation. This was the last facility operated by Alcoa, Inc. This facility was located on Sam Houston School Road across from the City’s present plant.