As part of Alcoa, Inc.’s continuing policy of turning the operation of the company town of Alcoa over to its residents, the City of Alcoa assumed ownership and operation of the water system on January 4, 1960. Along with it came the company’s employees that had been operating the system who then became City of Alcoa employees. Don Bledsoe became the City’s first Superintendent of Water, a position he held until 1967 when he was named Director of Public Works.

Under Bledsoe’s direction, the 1927 plant was rebuilt in 1962 - 1963. Utilizing the existing laboratory building, two new sand filter units, a valve house, and other modernized equipment were added that expanded the plant capacity to 8 million gallons per day (MGD).

In 1972 - 1973, all of the remaining Aluminum Company 1927 buildings were replaced. Construction included a new intake structure and the pumps on Little River, new operations and laboratory building, new high service pumps, and a third mixed media treatment unit that brought the filtering capacity to 16 MGD. Further expansion completed in 1978 upped the filtration plant’s capacity to 24 MGD. Ultimately the plant’s capacity could reach 36 MGD with the upgrade of the two original 1962 treatment units.

Facing more stringent treatment regulations and an aging treatment plant that was becoming more expensive to maintain, City staff began in 2001 evaluating options of either (1) rehabilitating the existing treatment plant or (2) constructing a new plant with the latest treatment technologies. After several months of evaluations, the decision was made to construct a new membrane filtration plant across the road from the old plant site on Sam Houston School Road. Following many months of pilot testing, design and then construction, the City completed its award winning membrane plant in March 2007. Water conservation measures by Alcoa, Inc, closure of Alcoa, Inc.’s West Plant, and South Blount County Utility District constructing its own filtration plant lessened the demand for the City’s water and allowed a smaller, 16 MGD capacity plant to be constructed. The current plant’s capacity is upgradeable to 24 MGD. On average, the plant treats between eight and ten million gallons of water per day.

The City’s water transmission and distribution system has also expanded during the past 50 years. Over 10,000 homes and businesses in Alcoa and northeast Blount County are provided City of Alcoa water through 240-plus miles of water mains.

In addition, the City continues to provide water to the Alcoa Inc. North and South Plants and the Tuckaleechee Utility District. Both the City of Maryville and Knox Chapman Utility District also purchase water from Alcoa on an as-needed basis. Recent improvements to this system include a 1.5 million gallon water tank and pump station in the Wildwood area and construction of a 12-inch water line to serve the Rockford area. A significant challenge in the near future is replacement of the two Overlook Reservoirs, now some 90 and 68 years old, respectively. 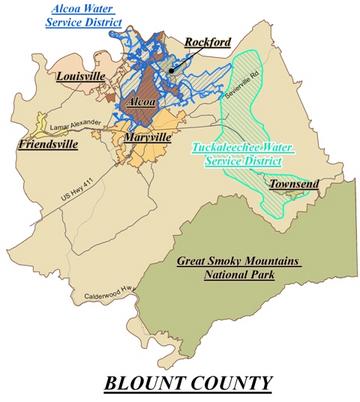 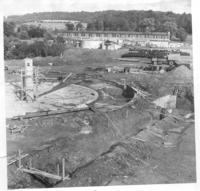