The Little Tennessee River and its hydroelectric potential brought the Alcoa Inc. to East Tennessee in the early 1900’s. In that way, the role of electricity has played a major part in the City of Alcoa and all of Blount County.


In February 1886, Charles Martin Hall discovered that cryolite, a sodium aluminum fluoride, in molten state will dissolve aluminum oxide. Using a carbon crucible, Hall isolated aluminum by passing an electric current through the molten mass. He was issued a patent for this process in April 1889. By the end of that year, his company, the Pittsburgh Reduction Company and the predecessor to Alcoa Inc., became a multi-million-dollar company.

To produce one pound of aluminum required 10 kilowatts (the amount to burn a 40-watt bulb for 10 days). Thus, Alcoa Inc. created a massive plan for developing the entire watershed of the Little Tennessee River in 1910, and built six major dams over several decades. Cheoah Dam, at 230 feet, the highest in the world at the time it was built in 1919, is located on the Little Tennessee River just upstream from the mouth of the Cheoah River.


Then, Santeelah Dam was constructed in 1926. Located nine miles from the mouth of the Cheoah River, its powerhouse is located three miles above Cheoah Dam. A five-mile conduit transports water to the powerhouse. Calderwood Dam, a 230-foot arch type dam nine miles downstream from Cheoah Dam followed in 1930. A pressure tunnel one-half mile long transports water from the reservoir to the Cheoah powerhouse. By 1937, the combined output of Cheoah, Santeelah and Calderwood at 330,000 horsepower was 265,000 KVA.

Although Alcoa Inc. also built two dams in North Carolina, Chilhowee Dam was the last Alcoa Inc. dam in Tennessee completed in 1957. The project relocated more than three miles of Highway 129, and the lake covers 1,750 acres with a 30-mile shoreline. This dam measures 88 feet high and 1,370 feet long.


In 1941, Alcoa Inc. relinquished approximately 1,500 acres to TVA, which built Fontana Dam. In addition, TVA took over the regulation of the water flow at all of Alcoa Inc.’s facilities on the Little Tennessee River. In return, Alcoa Inc.’s benefits included a better-integrated system, property retention and credit for the electricity generated by the plants. In 1957, some of the transmission lines for this system were transferred to the City of Alcoa’s Blount Electric System, known today as the City of Alcoa Electric Department.

Meanwhile, in 1913, Alcoa Inc. opened its smelter, which would turn alumina into molten aluminum. The first fabricating operation, known as the West Plant, opened in 1920 to produce items ranging from aluminum pie plates and siding to aluminum for patio furniture and pots and pans.

As the United States was on the verge of entering World War II, Alcoa Inc. experienced a 600% production increase and a $300 million expansion. By 1942, the North Plant fabricating facility was in operation, making aluminum sheet for the 300,000 airplanes built for the war.


In 1943, the aluminum industry was the largest single electricity user in the U.S., consuming 22 billion kilowatts annually. By 1945, the company’s power plants in East Tennessee and West North Carolina were furnishing 50% of Alcoa Inc.’s power, with the other 50% purchased from TVA.


In 1965, the company entered a new market for aluminum - the beverage can. Tennessee Operations and its sister plant in Evansville, Indiana, were chosen to lead the effort in can sheet production. However, to handle the millions of aluminum cans already being recycled in the U.S., Alcoa Inc. opened a can reclamation facility at Tennessee Operations in 1975.


In 1989, the West Plant was shut down. In 1990, the WWII vintage hotline was replaced with a state-of-the-art, five-stand mill. Tennessee Operations continues to produce molten metal in its smelter, and the company is considered a world benchmark in the production of high quality aluminum can sheet.


In September 2007, the company broke ground for the installation of two, massive pusher preheat furnaces followed by the start of a $22 million expansion project at the Can Reclamation facility.


March 2009 saw the company curtail the operation of the Primary Metals (smelting) plant due to plunging aluminum prices and laid off 450 workers.

In July 2009, limited operation of one of two new, 48-ingot capacity, 1,200-ton pusher preheat furnaces began at the North Plant with the second pusher going into service in July 2011 providing both quality improvements and significant energy savings.


On March 26, 2010 Alcoa officially dedicated its expanded the Tennessee Can Reclamation facility increasing its recycling capability by nearly 50%. The expansion included a new crusher and delacquering furnace and supporting building enclosures, utilities and environmental systems.


In January 2012, Alcoa Inc. announced it would permanently close its Tennessee smelter idled in 2009.


On May 2, 2013, the company announced it would invest $275 million to expand and convert capacity at its rolling mill to support automotive producers’ plans to use more aluminum sheet to increase fuel efficiency, safety, durability and performance of cars and light trucks, adding 200 full-time, high-value jobs upon completion.

On Aug 29, 2013, Alcoa broke ground on its $275 million auto expansion at its Tennessee location.


In September 2015, the expansion and conversion for was completed for producing automotive aluminum sheet to automakers that including Ford Motor Company, Fiat Chrysler Automobiles and General Motors. The rolling mill equipment allowed production to switch between aluminum sheet and can sheet thus allowing to adjust production quickly depending on market demand.

Also, in September 2015, Alcoa Inc. announced its split into two publicly traded companies, with one focusing on mining operations and the other, including the Tennessee operations, focused on technology and involvement in the aerospace and automotive industries.


In March 2016, the company changed its name from Alcoa Inc. to Arconic for its Tennessee operations. 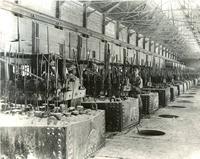